Receive updates, blogs, and more from me!

Leah Katz Ph.D. Here We Are Why I Broke Up with My Scale

Research suggests that as much as 80% of women struggle with poor body image, and 70% of women who are at healthy weights want to be thinner. Body image trouble can lead to a host of other difficulties, such as depression, anxiety, and eating disorders. 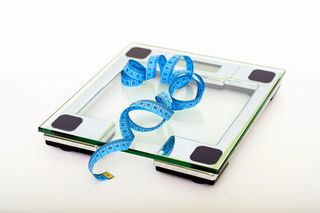 In my clinical practice, I see repeatedly how harsh many of the women and teenagers I work with are with their bodies, but this article is about my own journey with body image and weight. I always assumed I had a sound body image.

I felt good about myself, kept active, and maintained a healthy BMI. I knew several family members and friends who suffered from different forms of eating disorders, and I felt grateful to have fallen on the other side of the fence, having not developed one myself.

However, I had a rude awakening about how harsh my own thoughts could be towards my body while I was on my first ever meditation retreat a few years ago. Although I didn’t have any observable signs of poor body image, I carried an overwhelming amount of discreet negative thoughts directed at my appearance.

I noticed the onslaught of negative thinking I had in response to walking past a mirror. I didn’t focus on my face, my eyes, or my smile, and instead got so picky with myself. Why do I have pimples and the start of wrinkles at 30? Oh my, when did my thighs get so huge? I really shouldn’t have worn those leggings. I need to start eating less. And these thoughts were happening with alarming frequency in the brain of a woman who had always assumed she felt great in her body.

Practicing mindfulness helped me shift my relationship to these painful thoughts. I started to notice them as they occurred. Instead of automatically believing them, as I had been doing for years, I learned to recognize them for what they were: sad thoughts cultivated through years of exposure to unhealthy messages about my weight and body. Not the truths I had come to understand them to be.

With this shift in my awareness, now when these thoughts appeared, I would notice them, gently let them pass, like clouds in the sky, instead of following them down a rabbit hole of other thoughts and feelings that left me feeling disconnected and upset with my body.

I cultivated a greater sense of gratitude for the miraculous body I was given and developed awe for what was happening within and beneath my skin. I began to observe my body in motion- grateful for the simple (or not so simple) acts of being able to walk, run, stretch. I was gentler with how I handled my physical self in such acts as applying moisturizer to my face. I focused on being healthy rather than ‘skinny.’ I looked deeply into my own eyes (on occasion) and affirmed how much I loved myself.

All of these practices are beautiful and helped to a great extent. I gained tremendous self-awareness of the degree of negative chatter occurring in my mind about my physical appearance and learned to both detach from the thoughts and create healthier, more gratitude-based thinking about my body- both the external and internal aspects.

But curating positive thoughts without action has its limitations. Though I was learning to observe my thoughts instead of being swept away by them, I was still having them. A lot. Much of the perpetuation of these thoughts had to do with a pesky little device that lay in the corner of my bathroom. You got it. My scale.

You see, when we invest energy in practicing mindfulness and self-development, yet still engage in unhealthy behavioral rituals (for me, weighing myself daily), then we are still reinforcing old, unhealthy beliefs. In my case, these beliefs were the overemphasis of my weight, and what I interpreted this to mean about myself.

And then came a point not that long ago where I had had enough. It was time to take action against these uncomfortable judgments. At that time, my daughter was 4 and I didn’t want to perpetuate the culture of poor body image that I had grown up with. I didn’t want her to have a mother who would weigh herself and then mutter something rude to herself about that number. (Even though she had never actually witnessed this, children pick up on subliminal things.) I needed to take steps to develop a truly loving, respectful relationship with my body. 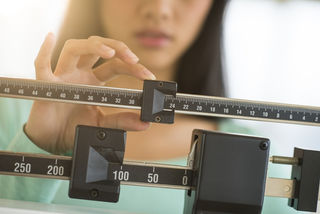 For my sake, and for hers, I decided it was time I broke up with my scale.

Now for full transparency, we actually broke up once, got back together briefly, and then had a final breakup. The first time we broke up, I must admit, I asked my husband to take the scale away. Hide it from me so I wouldn’t be tempted to sneak in a visit. And he obliged, put it away in what he thought was a clever hiding space.

That worked for a few days. Then I noticed the creeping curiosity slink in and trick me with its masked logic. What did I weigh? My pesky thoughts would say. Is having my scale away affecting my weight at all? As a researcher, shouldn’t I have access to this data? (Did you catch that irony there?) And so, I’m embarrassed to say, I searched and found it, took it back out in its grey metallic glory, and resumed my daily habit.

I quickly caught my lapse, and this time, put the scale away myself. I didn’t need fancy tricks or someone else to take responsibility for getting me to get healthier with my body. No. That obligation fell squarely on my shoulders. If I was going to learn to feel better about myself, that duty was mine and mine alone. So, away the scale went.

Not weighing myself was not a magical fix. But, I noticed a lightness, a freeness. I no longer engaged in the daily judgment or self-flagellation that came with gaining a pound (or conversely, the celebratory feelings of accomplishment when I had lost a pound). I enjoyed my food more because I wasn’t thinking in the back of my mind about how what I was eating would affect my weight- because I knew I wouldn’t be hopping on the scale the next morning. It was easier to slow down and savor what was going in my mouth because I was limiting the immediate association I had formed between what I ate and my weight.

When I ate, I asked myself more often, what is my body craving, and learned to pay better attention to my cues when I was full. I noticed I really didn’t feel that good when I ate late at night, and would try and curb that impulse- not because I was afraid of what the scale would say, but because I was tuning in to what my body was saying.  I began to pay attention to my body and trust it in a way that the flashing number only diminished.

With the scale away, the mindless, daily act of weighing myself is no longer an option. When I feel the urge, I work through it with counteracting worry thoughts with healthier, grounded ones. I remind myself that my self-worth, and physical health for that matter, go far deeper than the number on any scale. I remind myself that I am keeping myself healthy with eating well, physical exercise and meditation, which are better indicators of health than weight. (Of course, check in with your medical provider if there is a medical reason for keeping your scale around).

If you feel weighted down by your scale (pun intended), and think a break up may be helpful, try doing it this way: Thank the scale for whatever it has offered you. Then recognize it for what is: a mechanical device designed to give you a number. Nothing more, nothing less. Reassure yourself that you are capable of taking it from here as you focus on building a stronger, healthier relationship with your body.  And then, set the scale aside, and allow yourself to feel lighter and more empowered as you step into greater self-worth.